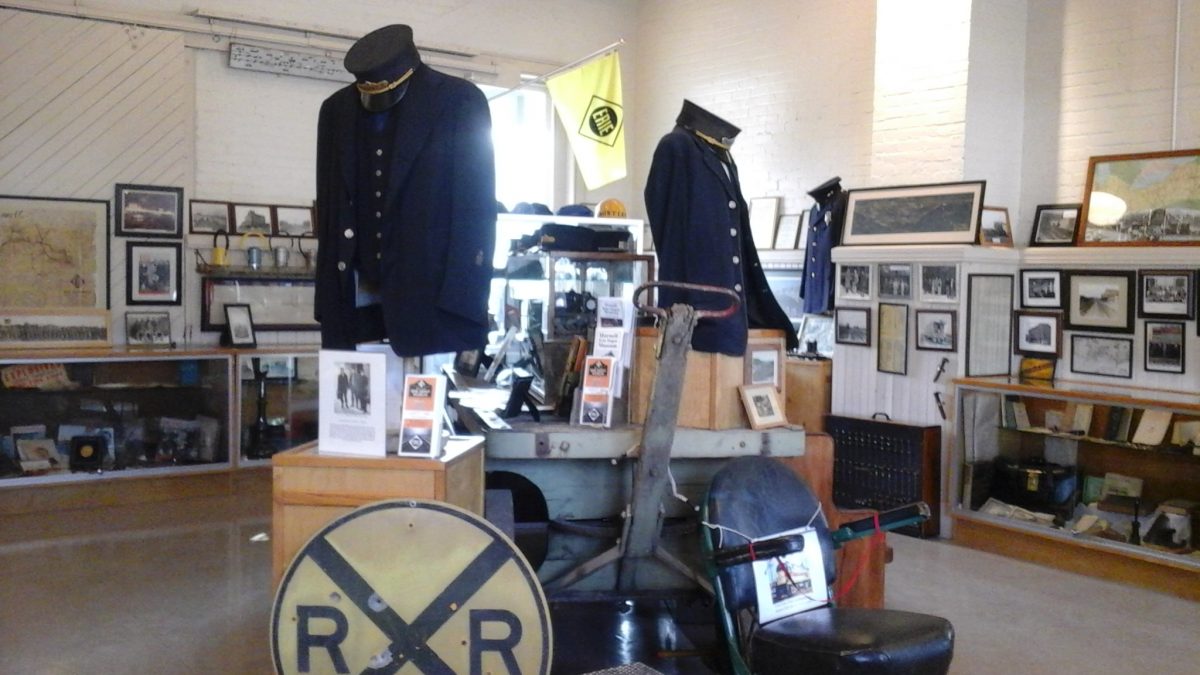 Since early 2019, Geneseo students completed internships, among others, with county historians in Ontario, Livingston, Niagara, and Erie counties; with town historians in Avon, Aurora, and Warwick; with Letchworth State Park, the Erie Railroad Museum in Hornell, and the Livingston County Historical Society Museum in Geneseo. In the spring and summer of 2021, Geneseo students will again spread far and wide, completing work with local historians across New York State.

Geneseo, more than many colleges across North America, stands directly on Native American land. “Chenussio” appears in New York’s colonial records and in the writings of French Jesuit missionaries in the middle of the seventeenth century. The Genesee Valley, the beauty of which we sing in our college’s song, was a hub of indigenous activity for many centuries. Geneseo stands directly at the Western Door of the Haudenosaunee longhouse and critical events in Seneca history took place near and on the very ground the campus occupies. The Big Tree Treaty of 1797, for instance, was negotiated in one of our parking lots. The Senecas there signed away all their lands in western New York, from that gorgeous Genesee river valley to Lake Erie, eleven small reservations excepted. The town’s white founding fathers all were involved in dispossessing the Senecas. We occupy what was a major Seneca town site in a state that could not have taken the shape it now holds without a systematic program of Iroquois dispossession. It can be argued that no SUNY school stands on ground so closely linked to that history of dispossession. This web project is an attempt to tell that story.

MOLDING HISTORY: JELL-O’S IMPACT ON LeROY, NEW YORK, AND THE U.S. FROM THE NINETEENTH TO THE TWENTIETH CENTURY

This mini-documentary is dedicated to the HIST 249-01 course, taught by Professor Joel Helfrich. It aims to push people to consider the seemingly unimportant aspects of history and notice how they can be tied back to the greatly observable present.

I would also like to acknowledge Lynne Belluscio for finding the opportunity to be interviewed for this project, and her guidance in my research process. The rest of the interview can be found here: https://youtu.be/xnWGvN_K_R4

The video transcript with sources can be found here: https://docs.google.com/document/d/1g…

Zach Vila is a student at SUNY Geneseo who participated in an internship through the Geneseo Center for Local and Municipal History, working as an archivist for the Rochester Public Library.

Watch the video above to view Zach’s experiences working as an archivist, their engagement with public history, and the things they have learned through the various internships offered through the college.

Brice Hatch is a student intern working for the SUNY Geneseo Local History Program led by Tina Thompson, the local historian for the town of Henrietta.

Students can discover new ways to engage with the past, and to learn more about their ancestors, and people who lived in the same location as them decades, or centuries before.

Genna Huizinga is an economics major with two additional minors in history and philosophy. Genna interned for the town historian of Brighton, New York, and applied due an interest in history.

The internship allowed Genna to gain a better understanding of the history field, and to discover and opportunities the field of history offers.

Guided under Mary Jo Lanphear, the Brighton town historian, Genna worked on researching applications for Pomeroy Foundation markers, which require primary source documentation. An additional project was the Thomas Boyde Jr. project, the first black architect from Rochester, NY. The goal of the project was to create a comprehensive survey of Boyde through documentation of Boyde’s work. This involved searching through family archives, blueprints, etc.

This project was impactful due to newfound public access, but also by allowing those who are studying figures such as Boyde to implement his work into their studies.

John Trutt interned under the Wayne Historian Organization to “beef up their database.”

Initially attending Geneseo as a Psychology major, Trutt did not envision himself participating in a history internship program. However, Trutt is now a history major, joining the internship to find further fields to work in, and future paths to follow in the public history field.

Trutt’s assignment was to “beef up” the Wayne Historian Organization website, by improving their database regarding information of Newark-Arcadia schoolhouses. Given a lot of freedom to implement this information into their database, Trutt expressed his confidence from his research and writing, and how he was able to truly feel involved.

“Dwight Dinkins ’22 is an intern at the Niagara County Historian’s Office. Even though he’s a math major, Dwight was inspired by a Geneseo professor to pursue his interest in Native American history.”

This YouTube video highlights the experience of Dwight Dinkins, who, through Geneseo’s History Department, was able to navigate his interests through historical research with archives and other materials, conversations with historians and professors, all while attending college as a math major.

Geneseo has a numerous opportunities at a student’s disposal to pursue historical research and engagement.

Click the hyperlink above, “Preserving the Past” to learn more.

Over the summer of 2022, Coffed worked as an intern for the town historian, Susan Mee, of Rush, NY, a town located in Monroe County. Working mostly from Susan’s office, Coffed was able to work on various projects.

Ranging from working with arranging boxes full of historical documents, postcards, letters, books, etc. by sorting them into respective piles and proper filing locations. Some documents were from other towns, which allowed Coffed to communicate with other local historians. Additionally, sorting through postcards was a major task; sorting them into envelopes for each respective location and individuals.

Highlighting many of the key histories surrounding Rush, NY, and the general area, Coffed was able to dedicate numerous hours towards understanding the history of Rush, its progression, and how Rush functions today, such as how Rush used to have its own school district, but is now associated with Rush-Henrietta.

By engaging in the preservation of history, students and other individuals are able to propagate the stories which originated from perhaps their hometown, or other surroundings areas, and create a sense of inclusion and belonging.

Public history is loosely defined as “a broad range of activities undertaken by people with some training in the discipline of history who are generally working outside of specialized academic settings” Wikipedia.

A video documentary from Lucas Brenner highlighting his experience with hands-on historical material.

A brief documentary by Seth Wagner highlighting an interview of the importance of local history, along with his experience of historical material regarding East Rochester.

George Macko is a history major who participated in an internship through the Big Springs Museum in Caledonia, New York.

The work mainly involved cataloging the museum’s collections, and collecting donations. The majority of the collections had not been documented, and as such, Macko worked on a system to properly catalogue the collections by working with other fellow interns.

This internship was useful, as it allowed Macko to create a database for easier access to the museum’s material, such as incorporating information via the internet, and allowed for a greater sense of interconnectedness through working with fellow peers.

A brief documentary highlighting Kiersten’s experience as an intern for the Town of Bristol.

Kiersten is an anthropology major who worked alongside Bristol historian, Beth Thomas.

The Community Place: Research on Settlement House Locations in Rochester

Minstrelsy and Minstrel Shows in Rochester

Work and Labor on the Erie Canal